Sometimes you have to wrestle with God

I’d like us to spend a little time with Jacob.  The core of his story can be found between Genesis 25 and Genesis 35.  His birth is interesting.  He is a twin.  He and his brother Esau jostle in the womb before they are born and when they are born, Esau is born first, and Jacob is born grasping Esau’s heel.  Jacob means ‘heel grabber’, as the footnote in your Bible will inform you, ‘heel grabber’ is an idiom for he who deceives.  And the deceiver is true to his name.  Before we have finished Genesis 25 Jacob has persuaded Esau to sell him his birth right for a bowl of soup, and two chapters later he dresses in fur skins and deceives his father in order to receive the blessing intended for the firstborn.  Esau is furious.  And as a result the deceiver escape to his uncle Laban.

And so, he escapes with his life, but little else.  But it’s a long journey and that night he is alone.  God likes it when he finds us alone.  Jacob has grown up in a home where the name of the Lord is known, where the great God of the universe is worshipped, but it has taken until Jacob is alone for encounter to take place.  We’re in chapter 28, Jacob has reached Bethel.  Bethel means the dwelling place of God.  Let’s not jump past that too quickly.  Encounter is about to take place.  Jacob has grown up around the things of God, but now he is about to have  his own encounter with God, not mediated through his father Isaac or his mother Rebekah, his own experience.  It happens when he is alone and in a special place, Bethel.

Retreats should be a regular part of our journey with God.  We all need daily devotional time with God, but we also need to build in patterns of retreat.  A journey to a special place.  That place where you have time, where you are alone and where encounter can happen.  A few times a year I drive the hundreds of miles to the Northumbria Community and join in with the rhythm of the community.  (I have chosen somewhere hundreds of miles away on purpose because I believe that pilgrimage – the act of journeying – is also important.)  The last 12 months have not been easy, but it has been my place where I can be alone and my place of encounter.  It has sustained me.  Where is your Bethel?  How often do you go there?

And now Jacob continues to Laban’s home and works for seven years to win the hand of Laban’s daughter Rachel in marriage.  But deception seems to run in the family and the day after the wedding Jacob wakes up with the wrong daughter (that has got to be awkward!).  He complains and is given Rachel as his second wife in return for another seven years work.  He is now married to Rachel and Leah.  And you’d think he’d be a changed man.  He has had a God encounter.  But the deception continues.  He continues to work for Laban but now asks that he be given all the speckled animals as his wages.  Seems innocent enough.  But whenever the strong animals mate, he places striped bark in front of the feeding trough, so the stronger animals give birth to speckled animals.  I have no idea how that works.  I have just spent a month in New Zealand and stayed with a cattle farmer for some of that time, he also had no idea how that works!  However, the mechanisms are not the important part, what we can observe is the deceiver is being deceptive.  He has encountered God, he has been abundantly blessed with wives, children, servants, cattle, material possessions … remember he arrived with nothing.  But still he deceives. 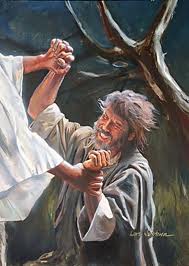 Then we move on to Genesis 32.  Jacob has escaped from Laban and is returning home (more on the chapters in-between in a future Recharge).  And he sends his wives and children, his servants, all that he owns, and large numbers of cattle on ahead of him.  And he is alone.  There’s our key again.  He’s alone.  But this is a different place.  This is Peniel.  This is an altogether different experience.  Peniel means face to face with God.  And in the night Jacob wrestles with God.  All night they wrestle and in the morning God touches Jacob’s hip and from that time forward he walks with a limp.  But watch what happened there.  He was alone and he wrestled with God and as a result he walks differently.  There’s a whole level beyond encounter, and it is the place of wrestling.  And you and I know the people who have wrestled with God.  There is something about them.  A spiritual maturity that is almost tangible.  And they walk differently.  And if you talk to them, they’ll tell you that Jacob had it easy, for some of them wrestled with God for weeks or months or even years before they learnt to walk differently.  But to get to that level above encounter will invariably involve wrestling.  And because of the way you and I are wired, it’ll likely take the form of crisis or suffering.  But there is a hidden key in the Jacob account.  In the middle of the wrestling Jacob makes this statement, I will not let you go until you bless me.

That’s a tough one.  But to have the courage during our crisis, in the midst of our suffering, to say, “God, I will not let you go,” is the key.  Holding on to God through this period means God will bless us, and we will walk differently.

Oh.  And of course, the icing on the cake comes in Genesis 32:28,  “You will no longer be Jacob, but Israel.”  Jacob means deceiver, Israel means Prince of God.  He is irrevocably changed.

Maybe look at your diary leading up to Christmas.  Where is your retreat time?  When are you going to be alone enough for encounter and wrestling?  It is such an important part of your journey.