The snow is falling.  The gas lamps have been lit.  Ebenezer Scrooge ventures home.  It’s Christmas Eve.  He has begrudgingly given his employees Christmas Day off.  They only day off they get each year.  As he crunches his way home, snow underfoot, he senses that all is not well.  As he enters his home he is greeted by none other than his old business partner Jacob Marley who died seven years earlier.  Or if you are watching the Muppet version you also get Marley’s brother – they sing a duet!  Marley delivers his warning, because of the way you have behaved Scrooge, tonight you will be visited by three ghosts. 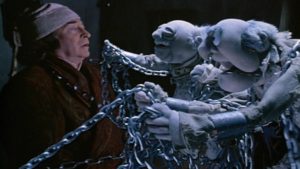 And  therein lies the part I want to draw your attention to.  The assumption is that ghosts are bad.  Evil.  But not in Dickens.  The Ghosts make life uncomfortable – and Scrooge felt they are unwelcome, but it is the ghosts who will for Scrooge become the agents of transformation.

Therein lies the power of ghosts.  Let’s look closer.  What is a ghost?  Allow me to borrow Peter Rollins’s definition and suggest to you that they are the presence of an absence, not in a strange spectral sense, no much more real than that.  In the course of my work I have had to conduct funerals for people who really are far too young to have died.  Shortly after the death the family will meet for dinner to talk about the deceased and to plan the funeral.  It is an important and healing occasion.  But there will come another dinner, not many months after the funeral, and they will sit and chat and everyone will be thinking about the deceased, but nobody will mention them for the fear of ‘ruining the mood’ and then they’ll all be thinking why is nobody talking about my deceased brother / sister / mother / father / friend?  Am I the odd one?  All communication seems to bend around a traumatic core.  But one that nobody wants to acknowledge for fear of causing a crisis.

The problem is the crisis isn’t in fear of being caused, it’s already happened, it’s just not being acknowledged. And that’s the presence of an absence.  VERY MUCH IN THE ROOM BUT NOT ACKNOWLEDGED.  A GHOST.

Or a different example, a marriage in which two people have drifted apart.  On the surface they try and keep up the pretence that all is well, they continue to act as if nothing has changed.  But things are not what they appear.  Underneath there is a whole subterranean network of acceptable transgressions that have been created to ensure that everything on the surface looks as if all is well.  Anger, bitterness, emotional affairs are a part of everyday life and are considered acceptable as long as they are never brought up.  The couple as well as their children are very aware of what is going on under the surface, but these things are never brought up for fear of what might happen.

The problem very much exists.  But not acknowledged.  The presence of an absence.  A ghost.  You can’t hide from the ghosts.  Freud said this:

“What you bury in the day, rises in the night. “

The suggestion is that what we push out of our conscience will emerge in our subconscious.  BUT IT IS THE GHOSTS WHO ARE THE AGENTS OF TRANSFORMATION.

There has to be a WAKE.  It’s come to mean the party that happens after the funeral, but originally it meant the Celtic practice of staying with the dead, tarrying with them and making peace with them before we bury them.  You have to sit with your ghosts.  Be prepared to enter the conversations.  The ghosts are there to help us.  They are there to draw our attention to things that need to be dealt with.

You can sit and have your dinner party where everyone avoids talking about the deceased, but while we push the discussion down, it emerges in Stress, Physical Illness, Depression.  When the married couple deny the situation, try and pretend all is well, it manifests itself in the behaviour of children in school, hours worked by women, time spent at the pub with friends by the man.

Again using Peter Rollins’s phrase, when we don’t sit with our ghosts, we make them into poltergeist.  They become noisy, disruptive, damaging.

But the process of coming through those sorts of situation well involves sitting with some ghosts.

What’s rattling around.  Who or what do you need to sit with?  The Truth Sets Us Free.  But not if we ignore our Ghosts.  But if we sit with our Ghosts, they can become Holy Ghosts.  They become agents of transformation.  But only if we listen.

And so Dicken’s introduces us to the Ghost of the PAST.  Lots of stories around this at the moment dealing with historical abuse and the barrier that celebrity gave some people.  These things mustn’t stay buried in the past.  I listened to the news story of a man who saw his stepdad kill his baby brother.  He was just four when he witnessed the murder.  He kept it secret for nearly 50 years.  What does that feel like, to live with a Poltergeist for 50 years?

What is in our past?  What colours the way we live?

And what about our PRESENT.  I went through a difficult time 18months back and lots of people were wonderfully supportive, but when I sat with my Spiritual Director I said to him, I’ve got hurt and feel broken and not sure I can get back up this time.  And he smiled and said, “yes, and I like you more already.”  There is something about presenting as superhuman which is so very unattractive to people today.  We even like our superheores to have flaws.  Check out the huge attraction of the anti-heroes in Suicide Squad™.  We don’t want perfect leaders.  Which is actually great news because we all know that we are all a bit broken really.  But we do need people who will face that brokenness and acknowledge that brokenness.  Bringing it into the open, exposed to the Holy Ghost.

But sometimes the hardest visitor of all are the Ghosts of Christmas Future.  Some of us need to bury future hopes and dreams and acknowledge, “not my will but they will Lord.”  And if we can do that, we give the spiritual principle of resurrection opportunity.  When we allow things to die, God can work resurrection and make that natural dream supernatural.  But only if we let it go.  Surrendered to the Holy Ghost.   Jesus said, “unless a grain of wheat falls to the ground and dies it abides alone.”

So let’s sit with our Ghosts in this Advent season.  Allow God to sit with us.  And then let them become Holy and not poltergeist as we allow God to deal with the Ghosts of Past, Present and Future.

Have the most wonderful Christmas free from Poltergeist.

The audio version of this is available here: