But Samuel remained in Ramah

At the end of the Epistle to the Hebrews there is a list of people that the writer says he doesn’t have time to talk about.  It is an extraordinary list of individuals, and despite the writer of the Epistles reluctance, I want to write about one of them and maybe in doing so, show you some of the characteristics of all of them, and at the same time, show you what it’s like to be a follower of God.

So, I would like us to spend a little time with Samuel.  He is my favourite bible character.  He is a legend.  He will be listed alongside Moses and Elijah.  Prophets – people who speak for God.  But I suspect he is not as you had thought.

But let’s go straight to his story and dive into a nice part.  Jesse’s house in Bethlehem.  Chapter 16 of 1 Samuel – allow me to introduce Samuel the King Maker.  Jesse has been commanded to bring his sons before Samuel.  And the sons pass by, Eliab comes, and Samuel is sure the Lord’s anointed stands there.  But the Lord speaks and says those words that we are so familiar with.  “Man looks on the outward appearance, but God looks on the heart.”  And so the sons are looked at and examined and God says, no.  Don’t miss that.  The quote about outward appearance is helpful, but the learning is to be found in the intimacy of the relationship between God and Samuel.  Samuel has conversations with God as if he were talking to a friend stood next to him.  So attuned is he, he can hear the very whispers of God. 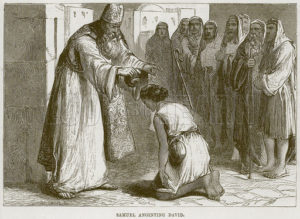 But more brothers are brought and “No, no and no”.  And Samuel makes the necessary enquiry.  Is there another son?  Samuel asks the question because God has said that he must anoint one of Jessie’s sons, and since he hasn’t seen the right one yet there has to be another one.   “Oh yes.  There is.”  And David is brought.  We’ll need a whole separate article to explain why David is missed out.

So Samuel anoints David.  He pours oil on him and the Spirit of the Lord comes on David.  And at the end of the chapter, “Samuel returns to Ramah.”

And of course, this is not the first King Samuel has anointed.  Israel had cried out for a King.  They’ve never had one before and Samuel had agreed to find them a king.  So 1 Samuel 8.  There is a man of great standing named Kish, a Benjamite, and he has a son named Saul and on this particular day he has lost his donkeys and he is searching for them.  And dusk approached and there is a feeling that they should return home.  But they hear that there is a prophet in the nearby town who might be able to help.  It’s Samuel.  His habit was in those days to set out every year and do a tour of Israel judging disputes in each district.  Today he is in the district of Zuph.  The bible tells us that the day before the Lord had spoken to Samuel and told him that this time tomorrow a man from Benjamin will come.  Anoint him to be King.  And so Saul comes, and Samuel knows he’s the one.  He tells him, “Don’t worry about the donkeys they have been found.”

And that’s a cool word of knowledge.  I’m not that impressed by the person who stands at the front of the large conference and announces, “there’s someone here with a bad back.”  I think they’ve got a chance!!  But Samuel’s words deal with a level of detail which can only come from God.  And it all happens exactly as Samuel said and eventually Saul becomes King. And Samuel returned to Ramah.

But let’s look at Samuel a little closer.  I hate two dimensional representations of Biblical characters.  There are no fairy tale princes and princesses in the bible, and for that matter, no fairy tale villains.  These are real people.

What’s he like?  In Chapter 16 that happy chapter where David is anointed.  In v4 the bible records, the elders of the town met Samuel at the entrance to Bethlehem and when they saw him they trembled with fear and asked “do you come in peace!”  They trembled with fear.

In Chapter 12 he makes his farewell speech.  At the end of the speech he asks Israel to once again commit themselves to the Lord.  They do.  Then as a sign Samuel announces:.

“Is it not harvest time – all is dry – he lifts his arms and it thunders and rains.” You’ve got this picture of this almost Gandalf like character silhouetted by the storm.

He hears what God is whispering, and he is the most powerful man in Israel.  But his character is probably revealed most clearly, not when he’s making Kings, but when he is breaking them.

Chapter 14, the Philistines are assembling at Mikmash and Samuel is coming.  He will pray and make a sacrifice and bless Israel before they advance.  But he’s late.  And Saul panics.  He decides that he can do it himself.  Samuel is coming.  God’s timing is perfect.  Wait and trust.  But Saul doesn’t.  He makes the sacrifice himself believing that he can do it in his own strength.  And Samuel arrives…

He is not happy.  “You have been foolish Saul.  You didn’t trust, now God will take this Kingdom away from you and give it to someone with a heart like his.”

And Samuel returns to Ramah.

Chapter 15, this is high drama.  Saul is sent to fight the Amalekites.  The instructions are simple.  Kill them all.  Even their livestock.  But Saul by now is full of pride.  He can do it his way.  So he keeps the healthy livestock and he takes King Agag captive.  But the instructions from God, through Samuel, were simple, and Samuel hears the very whispers of God.   Saul kill them all.  Even the livestock.

Samuel arrives.  Saul says, “The Lord bless you.”  Samuel doesn’t do pleasantries.  He’s never been good at small talk, He asks, “What is that sound of bleating.  Why have you been so arrogant as to disobey the Lord.  You have rejected God’s words, so you are rejected as King.”

And Samuel begins to walk away and Saul grabs Samuels robe and it tears!  Oh!!!  And Samuel declares, “In the same way, God will rip this Kingdom from you Saul.”

And Saul’s defence, “But I brought the livestock to sacrifice to God.”

And Samuel responds, “Do you think God prefers sacrifice over obedience.”  Just do what you are told Saul!!  And then Samuel catches sight of Agag.  He tells one of the soldiers to give him a sword, and then he announces, ““As your sword has made women childless, so will your mother be childless among women.”

And he kills him.  Very few denominations would license Samuel!

And then he returns to Ramah!

On a particular leadership course I attended Samuel was presented as one of the examples.  I disagreed passionately.  Not to the concept of leaders who serve.  That’s a given.  I just don’t believe Samuel is a good example.  You see Samuel didn’t serve anyone other than the Lord his God.  And he served him passionately and zealously all his life.  But he often brutal in his passion to see God’s will done.

But maybe a few more insights into Samuel’s character.  The people asked for a king because they didn’t want Samuel’s sons succeeding him.  Why, because they were godless and out of control.  But what chance did he have.  He was raised by Eli the priest.  Eli’s sons were put to death by God because instead of behaving like priests, they stole the meat that was to be sacrificed and slept with the women.  He never saw a model of how to parent.

Samuel is powerful beyond understanding, he is the king maker and king breaker, he hears the very whispers of God, but he is brittle, devoid of mercy, without grace, endued with a fanatical desire to serve God and see God’s will done.

And again and again we read, “and he returned to Ramah” – This phrase appears 13 times in this 1 book.  But more examples of Ramah in 1 Samuel:

David for some time was in the King’s palace.  Saul has slain his thousands but David his tens of thousands they cry.  And Saul’s jealousy is too much and he tried to kill David, but David flees to Samuel who is at Ramah.

Samuel dies and all Israel gathered to bury him – this is a state occasion – Samuel who judged Israel so well – God’s voice to Israel has died – and the whole nation has gathered – and where have they gathered … Ramah.

And to understand all this, we need to go to the start.  1 Samuel 1:1 … There was a man named Elkanah.  He lived in Ramah.  He was married to a woman named Hannah and they could have no children.  So once a year they travel to Shiloh and she prays.  And Eli thinks she’s drunk, but she’s praying with such intensity.  Like Rachel before her she prays, “give me children or I die.”  And she promises, Lord if you give me a son I’ll give him back to you.  And Samuel is born and when he is weaned (in Jewish culture that’s about aged three!) he is taken and given to Eli.  And God blesses Hannah with other children.

Don’t miss it.  He’s taken from his mum when he is three years of age.  He grows up with Eli in the temple.  Eli who has no parenting skills, growing up in a cold, uncomfortable temple.  And the people brought sacrifice.  And the bible describes Samuel as “the child in the Ephod.”  And we sigh and think it cute, but it’s horrific.  Surrounded by others making blood sacrifices and soon making blood sacrifice himself – killing animals.  He should be out playing with his brothers and sisters, but he’s the child priest.

Every year his mother comes with a new garment.  One visit a year she brings a ‘too big’ garment.  He will grow into it over the year.  God is always putting new things on us that we must grow into.  It’s part of the journey.  But just once a year she comes from Ramah.

And the Lord speaks.  “Samuel”.  And Samuel hears, and even in this piece of narrative there is a further indictment on Eli, but Samuel begins a conversation with God as a toddler that will continue for all of Samuels life.

He will be one of the most powerful men ever in Jewish history, he is the King maker and the King breaker, he hears the whispers of God.  But without his mother, without her love, he grows up brittle, devoid of compassion, his eyes burn with the fire of the zealot.  And he serves God with ferocity.

He’s not quite like the cute Sunday School lesson now is he?   So strong, so powerful.  But I wonder, if he wouldn’t have given the whole thing up to hug his mother and play with his brothers and sisters.  And as soon as he’s able, he moved back to Ramah.  His parents would have been dead by then.  But he would have been close to what could have been.

Ramah represents extraordinary sacrifice for Samuel.  And not one he really had a choice in.  He walks with God in a way that few people ever will, but it has cost him.   Samuel is flawed, broken, fragile and brittle.  As are many of the prophets.  They are very very human.  Just like us.

And God looks at the heart and often finds flawed, broken, fragile humanity, and God says, I can use that.  And the cost is often great.  But God continues to look for broken, fragile, people who will submit to His will even through the sacrifice.